Here is yet more proof that you can pull off some amazing visual effects with a minimal computer use. (via Fred "the man" Olen Ray's Retromedia Forums)

(via Fred Olen Ray's Retromedia Forums) Here are a few shots I've posted over time that were done for pennies... the one of the small girl in the dome is from SIDESHOW and was shot on set exactly as you see it. NO post production trickery involved. Just a combination of the dome and the girl sitting on a box way far back from the set. Cost? $0 The Castle on the hill from GIRL FROM BIKINI was done with an aquarium ornament from Petco and a simple matte in After Effects. Cost? $14 In after thought I think I should have put a slight fog diffusion between the plates to give the model that far-away look... oh well, next time. The ruined columns are from HARLOTS OF THE CARIBBEAN, foreground miniature shot on location just as you see it. Cost? I think it was $11. 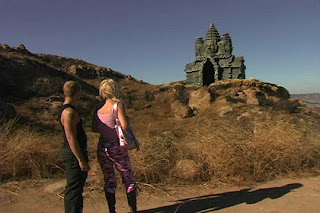 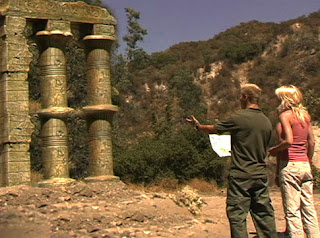 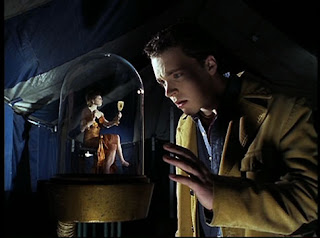 Even more forced perspective and no budget goodness...

(via Fred Olen Ray's Retromedia Forums)For our movie, POLAR OPPOSITES (international title DEADLY SHIFT) we had to resort to our usual on-set trickery to make up for the lack of a budget, so... here are some frame grabs of a few of the foreground miniature shots we did, mostly to add large amounts of rumble to our "live action" art department destruction.

The ceiling piece is a miniature that we suspended in front of the camera and tried to line up properly using a few c stands... it's about three feet long... on the floor area are several pieces of piled up stuff on a table to block the floor. There IS a certain amount of real stuff back in the room where the actors are and we tried to just make it look like a lot more than there is.

A flashlight was shined down through the ceiling hole to highlight the beams and wires.

The street scene is nothing more than a banged up toy car with a miniature telephone pole laid across it. It's so close to the lens it's almost touching it.

The building exterior was a very quickly done bit with broken pieces of real asphalt on a table and a handful of (too) tiny toy cars... we later went out and bought bigger toy cars.

These don't bear too close of an inspection, but they're only on screen for a few seconds each and I think they worked pretty well and cost very little to create.

Thought you might enjoy seeing a disaster on a budget. 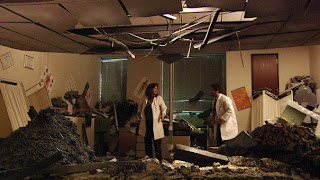 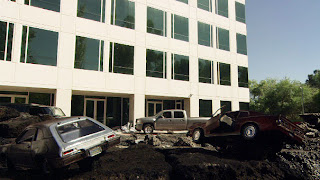 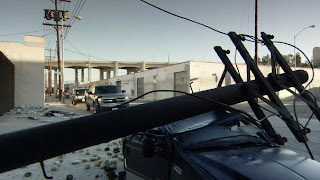